During the 1970's & 80's guitar players became aware that old Stratocasters made prior to 1965 had a sweeter sound with less discordant ice-pick than their modern counterparts. This led to a stampede search for old Strats which consequently helped drive prices up. There were various conjectures to explain this sweeter sound.... some believed it was the result of CBS cost cutting after 1964, others suspected it was old growth trees used in the body while others thought there was something mystical about old Strats. And one or two suspected it had something to do with the age of the guitar. No one knew the real reason and that added to the mystique.

In 1999 I stumbled across the reason for the sweeter sound of old Strats, it was aged pickups. And so I coined the terms Aged-sound and Non-aged-sound to define performance of Fender genre pickups that have six Alnico rod magnets.

I will explain Aged Sound with this rather interesting experience I had some years ago: a customer sent two 1964 Stratocaster pickups for repair, both were open circuit with broken wires in the coils. In one pickup the break was near the termination point and I was able to repair it without rewinding. The other one could not be repaired and had to be rewound, which I did using the original Formvar HF42 wire type. I wound it to the same DC resistance and tension which I judged from the repaired pickup. It looked identical and the resistance measured identical to the repaired pickup. But when I tested them in a guitar they sounded very different.

The one with the original coil which I repaired sounded dull and lifeless, it also had comparatively low output and the sound broke into distortion when I picked it strongly. The rewound one sounded just like a great NEW Strat pickup, bright, spanky, alive and loud and no matter how forceful the strings were picked/strummed the sound held together and did not break up.

With my curiosity aroused I measured the magnet strength and found them to be the same as a new pickup. I re-magnetized both pickups anyway but the sound did not change from either pickup. This experiment exploded the myth that aged magnets were the reason for this massive difference in sound. So I concluded it had to be the coil itself since there is nothing else to explain it. Another well known pickup manufacturer claims weaker magnets are the reason that old pickups sound sweet, but I can not confirm that claim when I deliberately degauss magnets.

To confirm my suspicion about aging of the coil I ran some analytical Q plots on both pickups, see the image below. To obtain absolute conclusive proof I also rewound the second (excessively aged) pickup. It then sounded identical to the first rewound pickup and returned an identical Q plot.

It turns out that Formvar insulation is not age stable, it's an unsophisticated old technology coating that degrades over time, unlike modern Polyurethane coatings which seem to go on forever. Formvar is also sensitive to heat treatment so depending on the length of time spent in, and the temperature of the wax pot at time of manufacture, it can take longer to degrade. That's the reason some old Strat pickups aged more severely than others over a similar time span. Those with slight to moderate aging lost some ice-pick brittleness and sound sweeter than examples of new pickups. Those with excessive aging, like the one I repaired, sound so dull and lifeless as to be unusable, something like turning the tone control down to 3.

This displayed (or attached) image clearly of my Q plots shows the difference between the 2 pickups, the black traces are the ones we are concerned with. The taller peak represents non-aged sound of the rewound pickup. The lower peak portrays aged sound of the original repaired pickup. Both pickups had identical high-peak plots after rewinding. 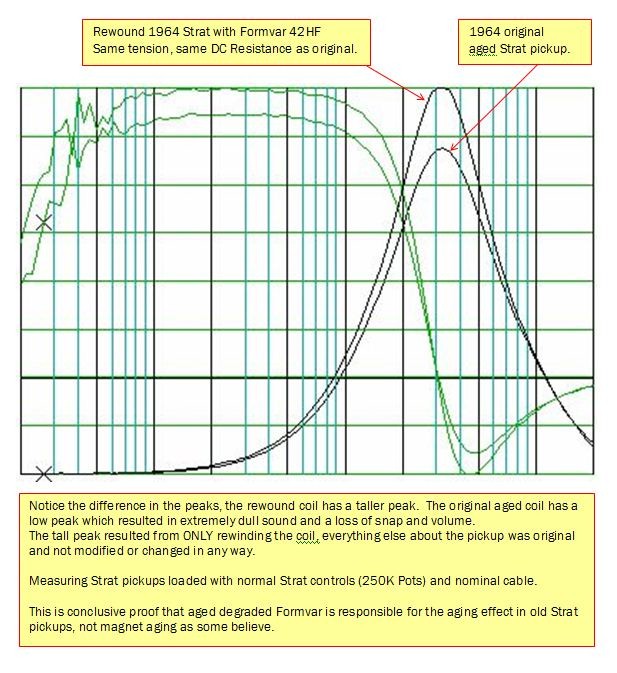 So there you have conclusive scientific proof for aging of old Fender pickups, Formvar wire degrades in time. It definitely is not due to aging of magnets.

Until now ALL hum-cancelling Strat pickups with Alnico rod magnets, regardless of brand, delivered Aged Sound to one degree or another. Because I understood the Aged Sound phenomena I have always advertised my pickups correctly as delivering Aged Sound of various degrees, others don't tell you (it seems they don't know about it).

Non-aged means scooped mids and brilliant highs with gun-shot attack and wide dynamic range where the sound does not break up under heavy pick attack.

The Impersonator 56 and the other Non-Aged Sound models are such a revolution because all existing noiseless Strat pickups with Alnico rod magnets (regardless of brand) deliver Aged sound where the midrange is more prominent, the highs are not as brilliant, the attack is softer and the sound breaks into crunch under heavy pick attack.